Locally known as Semana Santa (Holy Week), Easter is the most important celebration in Spain, and stands out for its epic brotherhoods’ processions and unique, age-old traditions specific to each region.

The atmosphere that characterizes the festivities is usually solemn, the picture spectacular, and everything seems fully immersed in emotion. Don’t let yourself be fooled, though – this is still Spain, which means neither the strong religious beliefs nor the somberness of the moment can hide the nation’s fervor for pomp and lively fiestas.

These being said, let’s take a closer look at the distinctive customs and traditions that accompany Semana Santa in various Spanish provinces.

Although each Spanish region, and even city and village, has its own particular customs and practices during this time of year, Semana Santa celebrations are nowhere else as elaborate and spectacular as they are in Andalusia, the sunny south of the country.

Here, the most important Catholic holiday is commemorated with a week full of color, art, religious fervor, and extravagant processions. The most spectacular events take place in Malaga and Seville, where the streets are taken over by flamboyant parades and intricate religious displays depicting biblical scenes.

Like everywhere in Spain, the festivities begin on Palm Sunday (Domingo de Ramos) and last until Easter Monday (Lunes de Pascua), with the most dramatic and passionate parades held on Maundy Thursday and Good Friday.

In Malaga, Semana Santa is celebrated with various religious and military parades accompanied by music, inviting incense, and floral scents, as well as lots of color and cheer. 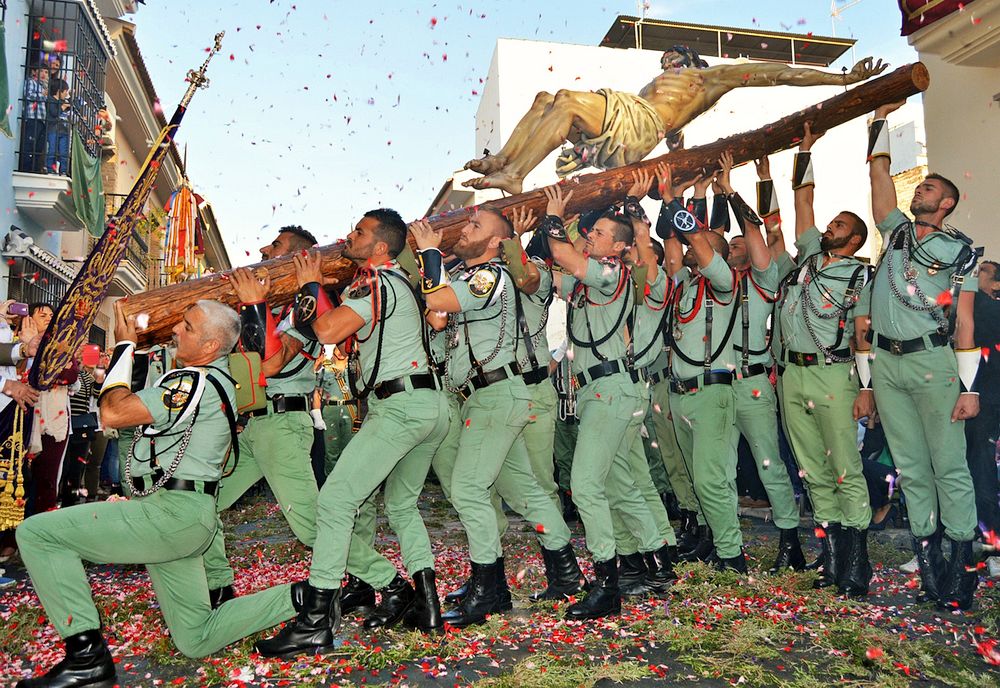 One of the most distinctive features, however, is the presence of tronos – huge ornate floats that are carried through the streets of Malaga by hundreds of church members. These remarkable thrones depicting scenes from the Passion are escorted by groups of penitents wearing long purple robes and women in black holding lit candles. From time to time, the silence is broken by spontaneous saetas – typical Spanish religious music with flamenco influences, usually performed from a balcony during a major public procession.

Although Easter celebrations in Malaga are of huge proportions, it’s the Seville Semana Santa that has crossed the boundaries becoming a world-famous event. During the Holy Week, the gorgeous Andalusian capital comes to life with thousands of pilgrims that gather here from all corners of the world to witness the city’s extravagant pasos.

A paso is an enormous float adorned with life-size wooden statues of biblical characters, designed especially for religious processions. In Seville, they are considered genuine artistic masterpieces, some of them dating back as far as the 16th century. Each movable float belongs to a brotherhood, or cofradia (there are over 50 in Seville), and has its own distinctive characteristics. A common feature, however, is the team of costaleros who convey the pasos on their necks and shoulders through the crowded streets.

The highlight of Holy Week in Seville is the night of Maundy Thursday, when all the processions start their march to the Cathedral. Known as La Madruga, the night between Holy Thursday and Good Friday is the most important and spectacular moment of Seville’s Semana Santa. On the dawn of Good Friday everybody gathers in front of Seville Cathedral to commemorate the trial and all the events that have led to the crucifixion and death of Jesus Christ.

This tense and solemn atmosphere changes dramatically on Easter Sunday (Domingo de Resurrección), when the news of the Resurrection of Christ brings plenty of joy and excitement in people’s hearts. The sober processions are replaced by lively and colorful parades; the floats are festooned with flowers; the weighty silent is expelled by exultant music; and people indulge themselves in all kinds of traditional sweets and pastries such as torrijas (slices of bread soaked in milk and eggs, and fried in olive oil) and pestihos.

Semana Santa in Castile and León

While the Semana Santa festivities in Andalusia are the most spectacular, the ones in Castile and León are often regarded as some of the most authentic, solemn, and austere in the entire country. Among the cities that hold remarkable processions are León, Zamora, Salamanca, Toledo, Avila, Segovia, and Valladolid.

In Salamanca, Zamora, Toledo, and Valladolid, Semana Santa has been declared Fiesta of International Tourist Interest of Spain.

Around 22 dramatic processions of pasos accompanied by ancient wooden sculptures of Jesus Christ and Virgin Mary in grief, along with hundreds of penitents carrying flags, crosses, or candles make Semana Santa in Salamanca one of the most important celebrations of its kind in the northwestern autonomous community of Castile and León.

The events unfold against a spectacular background and feature a series of particularities, including the processions performed by the University of Salamanca’s Brotherhood of the Students and the extraordinary artistic value of the pasos, which have been created by famous Spanish sculptors such as Mariano Benlliure, Luis Salvador Carmona, or Alejandro Carnicero, and are regarded as some of the best artworks of the Castilian School of Imagery.

The age-old rituals that date back to the 13th century, along with the richness historical and architectural details of Salamanca’s UNESCO-listed Old Town add a dose of drama and splendor to the unique atmosphere.

Things are a little different in the Romanesque city of Zamora, where the penance processions are usually basked in silence, meditation, and soberness; or in Toledo, where the artistic churches and narrow medieval alleyways lit up by candles make for a fantastic backdrop for the nocturnal processions that the town is known for.

In Valladolid, where Holy Week is the most important Catholic event of the year, art and religion blend harmoniously to create dazzling images and to commemorate the death of Jesus Christ. Most of the processions are considered exquisite displays of Castilian religious sculpture, featuring spectacular statues and floats created by famous Spanish artists many centuries ago.

A completely unique tradition here is the Sermón de las Siete Palabras (Sermon of the Seven Words) – a local ritual held in the morning of Good Friday in Valladolid’s Plaza Mayor after being proclaimed throughout the city by brotherhoods’ members on horseback. Another peculiar feature of Semana Santa in Valladolid is the performance of various theatrical plays that illustrate scenes from the Passion.

León, the city that plays host to Spain’s finest cathedral built in French-style Gothic architecture (Santa María de León Cathedral), boasts a wonderful variety of Holy Week processions and rituals. The most remarkable of them is by far El Encuentro – the solemn moment when the pasos of Saint John and La Dolorosa meet in Plaza Mayor.

Holy week in the region of Murcia is marked by a number of events and religious processions that generally stand out due to their strict order and distinctive characteristics, closely related to the area’s history and culture.

The streets of Lorca are taken over by penitents, horses, and chariots, as well as colossal floats carrying fantastic baroque statues depicting scenes from the Old Testament. The most prominent features of Lorca’s wonderful biblical parades are the great rivalry between the city’s main brotherhoods – the Whites and the Blues, as well as the striking Semana Santa costumes, which are typically embroidered on silk and decorated with religious scenes. There are also a couple of small museums in Lorca dedicated to these exquisite outfits.

Cartagena’s Holy Week processions are especially famous for their rigor, symmetry, and outstanding attention to detail. Each brotherhood in town is divided into small groups, whose members are meant to take care of a single float while wearing identical clothes. All groups march to the rhythmic beat of the drums and when they stop, they do it in unison with a military-like precision.

Another unique characteristic of the Semana Santa parades in Cartagena is the display of lavishly decorated floats filled with flowers, huge chandeliers (cartelas), and painted wooden sculptures created by both talented contemporary artists as well as classics such as Francisco Salzillo, Federico Coullaut-Valera, or Mariano Benlliure.

The charming university town of Murcia celebrates Easter with the same stately and elegant processions that characterize the region, but thanks to the multitude of masterpieces by Francisco Salzillo – the city’s famous son, they seem even more spectacular in their baroque splendor. Handing out sweets is another traditional custom at Murcia’s Semana Santa parades.

Other Semana Santa Festivities in Spain

The destinations above feature some of the most famous and spectacular Easter festivities in Spain, but there are many other towns and villages throughout the country that are worth a visit during this special time of year.

Designated a Fiesta of International Tourist Interest of Spain, Holy Week in Viveiro, Galicia makes for a fascinating religious and cultural experience, offering an eye-catching visual spectacle and great atmosphere.

Other notable Semana Santa festivities are held in Hellín (Province of Albacete), where spectacular tamboradas complement the processions, and Castilblanco de los Arroyos – a small city in the Province of Seville, where they have a very unique custom of manufacturing Judas dolls (Juas) that are later placed in various corners of the city and set on fire.

Although not as spectacular as in other Spanish regions, Semana Santa in Catalonia has its fair share of peculiar celebrations. For instance, the Silence Procession in Badalona dates back to the 17th century and distinguishes itself for being extremely quiet and lit only by candlelight.

Other noteworthy festivities include: Tarragona’s Procession of Loneliness where only women can take part, the Death Dance in Verges, and the Andalusian-style processions in L’Hospitalet de Llobregat, near Barcelona.