10 Of The Best Spanish Foods

That time when everyone visiting Spain was eager to try local classics such as paella, sangria, or tortilla Espanola seems long gone. Nowadays, more and more travelers want to get a true taste of Spanish cuisine, with all the regional specialties, century-old traditions, and Middle-Eastern influences that define it. And given the fact that Spain is such an incredible source of unique flavors, it would be an enormous shame not to enjoy them while here.

To get you started, we’ve rounded up a list of delicious Spanish foods that you should sample on your next trip to the beautiful Iberian country. 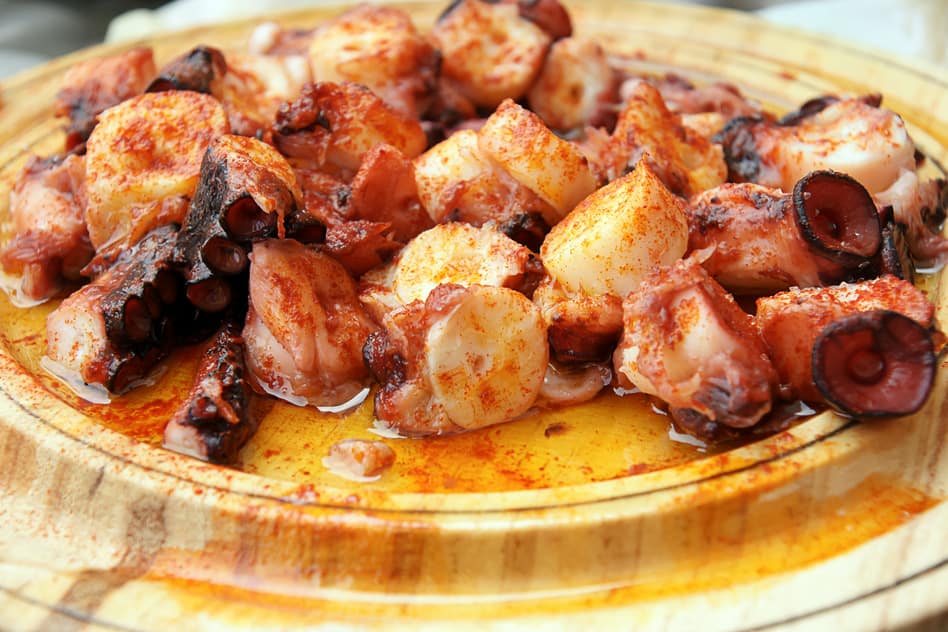 Commonly known as Polbo a Feira or Pulpo a la Gallega (Spanish), Galicia’s signature dish is as hearty and delightful as the region itself. Therefore, if you have the chance to visit this picturesque green corner of Spain, which is widely known for its amazing seafood, you should certainly try the delicious paprika-flavored Galician octopus, be it in a tapas bar, a fancy restaurant, or a traditional pulperia (octopus restaurant), where they still serve it on rough wooden plates.

The origin of Pulpo a la Gallega dates back some 125 years, when during the cattle fairs, muleteers used to bring their own octopus and cook it with olive oil and lots of paprika. That’s how the Galician octopus became a typical fair dish, hence the name Pulpo a la Feria (Polbo á Feira).

For an extraordinary experience, don’t miss the Octopus Festival held each August in O Carballiño, Ourense. 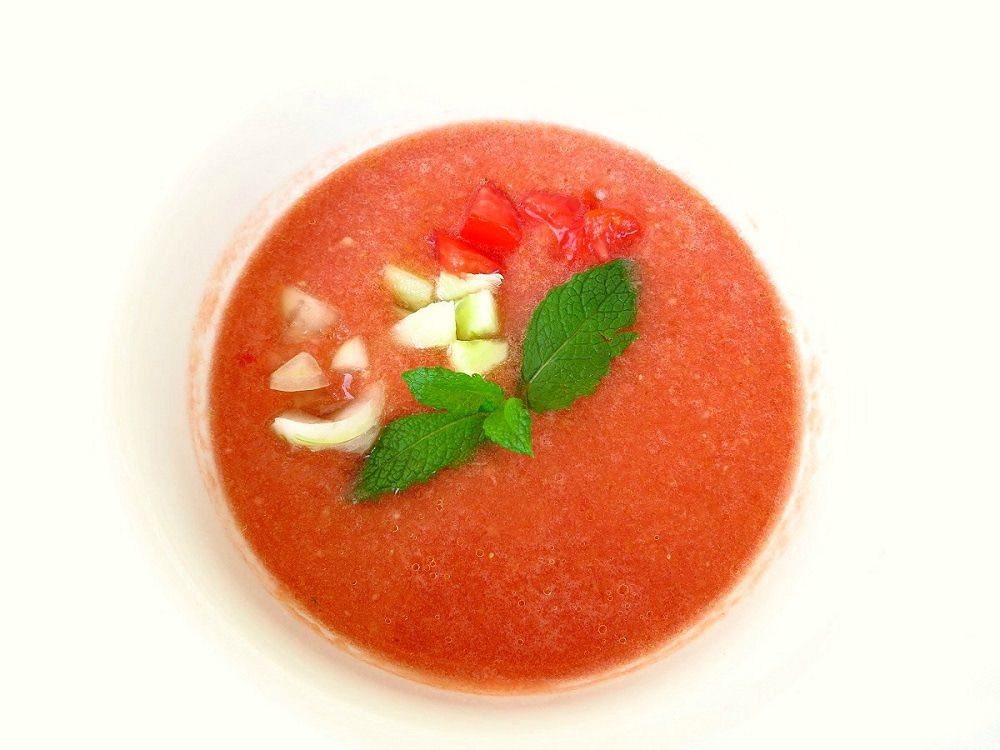 There’s no doubt Gazpacho, the famous Andalusian cold soup, has already toured the world in various shapes and colors, but those who’ve tasted it know that it is nowhere as delicious and fresh as here, in the fascinating south of Spain.

Traditionally served in summer, the classic Gazpacho Andaluz is a delectable and refreshing tomato soup usually made of tomato, cucumber, onion, stale bread, olive oil, wine vinegar, garlic, salt, and pepper. Depending on the area of origin, it can be served with croutons, chopped vegetables, ice cubes, and even ham.

Each August, the small town of Alfarnatejo, near Malaga, plays host to a delightful Gazpacho Festival where visitors have the chance to indulge in the iconic Andalusian dish and cheer themselves up with a traditional flamenco show. 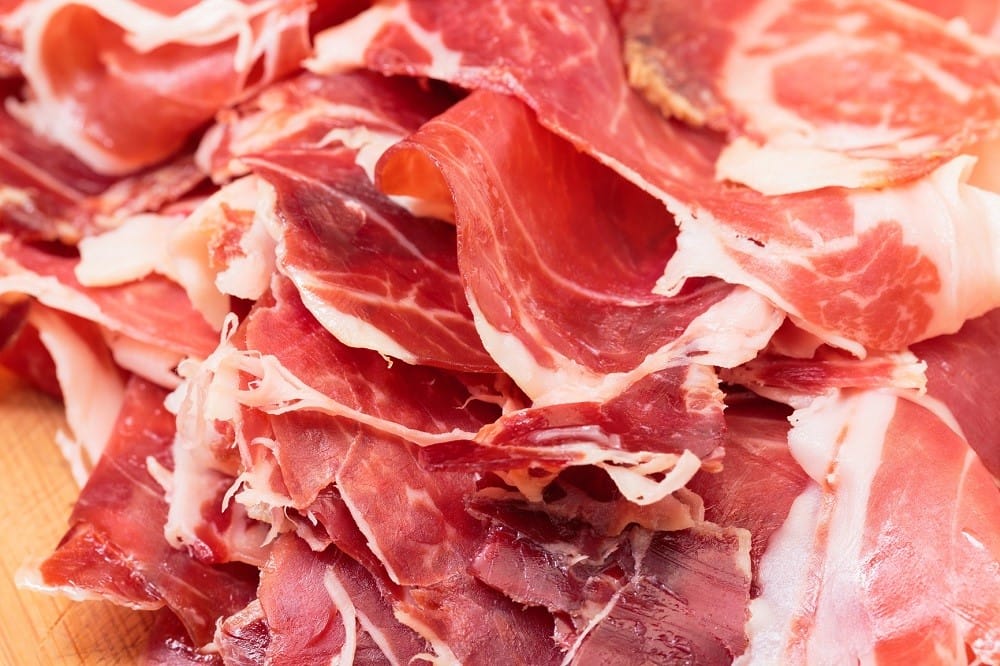 Giant legs of jamon hanging in a local tapas bar is among the images that come to mind when you think of Spain, but what many don’t know is that the land of bullfights and flamenco is also the world’s number one producer (and consumer) of dry-cured ham.

One of the country’s most treasured foods and a highly prized produce all over the world, the Spanish jamon is still made using century-old techniques and labeled according to the pigs’ breed and diet. Theoretically, Spain boasts two different types of cured ham – Jamon Serrano and Jamon Iberico, but in reality there are many variations available throughout the country.

Also known as Jamon Reserva or Jamon Curado, the famous Jamon Serrano is a dry-cured ham usually made in the Spanish sierras form various breeds of white pigs, including Landrace, Duroc, or Large White.

The exquisite Jamon Iberico, however, is a different story. Arguably the greatest ham in the world, this ancient delicacy is made exclusively from black Iberian pigs that roam freely on the picturesque oak pastures of southwestern Spain. The process is both elaborate and very rigorous, and lasts for at least three years. From the finest to the most common, Jamon Iberico is categorized as follows: Jamon Iberico de Bellota, Jamón Iberico de Recebo, Jamón Ibérico Cebo de Campo, Jamón Ibérico de Cebo. Whether cured, smoked, or fresh, chorizo is made and eaten all over Spain. It is an utterly delicious pork sausage with lots of garlic and pimentón (Spanish smoked paprika), and also the nation’s most versatile food, so it’s no surprise the entire world has gone mad about it.

The Spanish chorizo can be sweet or spicy, served raw as a tapa, or added in various dishes. Some of the most important types include Chorizo Zamorano – a variety made in Castile and Leon and protected by a Marca de Garantia; the sweet Chorizo de Pamplona; Chorizo Riojano, which is protected by PGI; Chorizo Patatero (made with potatoes); Chorizo Canario (typical to the Canary Islands, with a consistency similar with that of French pate); and those made in the province of Salamanca. The finest smoked varieties can be found in Asturias, Galicia, and Cantabria.

For a quintessential Spanish experience, try it with Manchego cheese and a glass of Rioja. 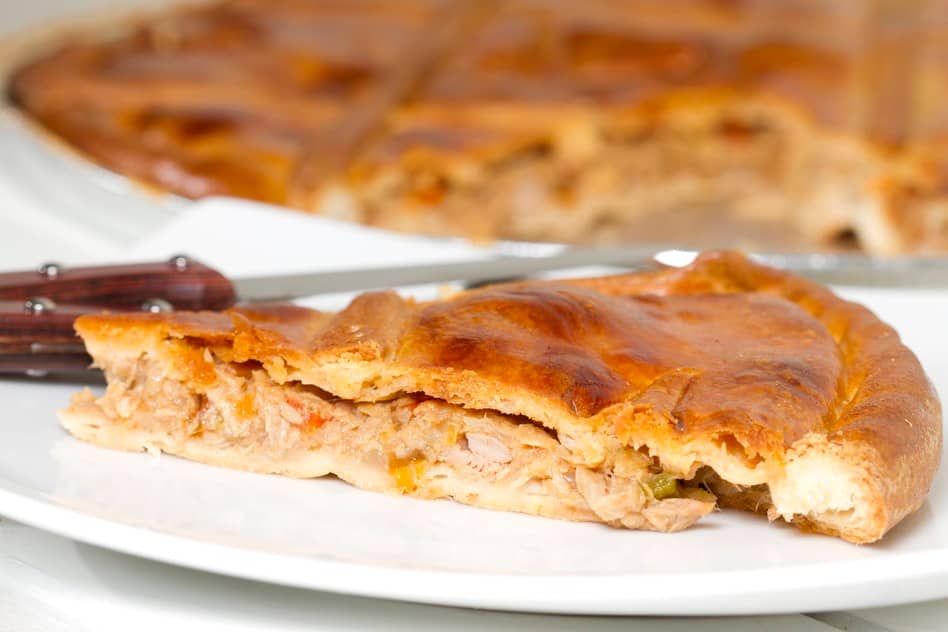 Some would say that there are as many versions of empanada in Galicia as there are grandmothers, so it’s no wonder this super savory pie stuffed with all sorts of sautéed goodness is the region’s culinary glory.

The name itself comes from the Spanish verb “empanar”, which means “to wrap in bread”. The filling can range from minced pork and chorizo to tuna, sardines, peppers, as well as other seafood and vegetables. A highlight is the delicious slow-cooked onion sauce (with or without tomatoes), which gives the dish its depth, flavor, and a touch of sweetness.

Although originally from Galicia, empanadas are popular throughout the world, especially in Southeast Asia, Latin America, and Europe. 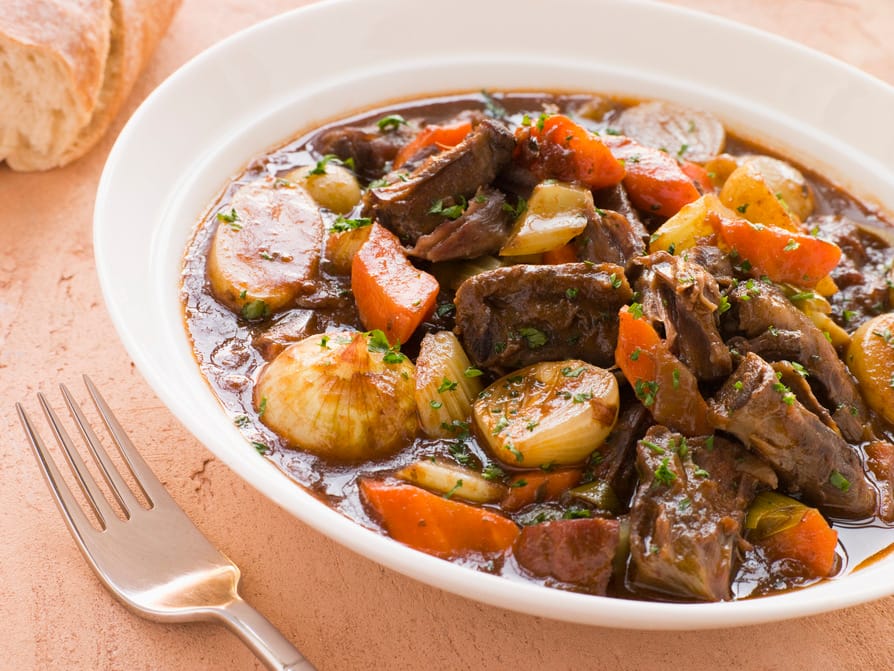 Don’t let the name frighten you, the traditional Andalusian tail stew is much more delicious than you could possibly imagine. Having its origins in 16th-century Cordoba, this dish was initially made of tails from the brave bulls killed during the corrida. Nowadays, it is mainly prepared with oxtail (cow’s tail), but its sophisticated mix of ingredients along with the slow-cooking process, make the meat literally melt in your mouth.

Although ingredients may vary from one recipe to the next, some of those commonly used include carrots, garlic, onion, olives, tomatoes, and spices. Some variations can also contain a bit of wine (Jerez) and even chocolate. 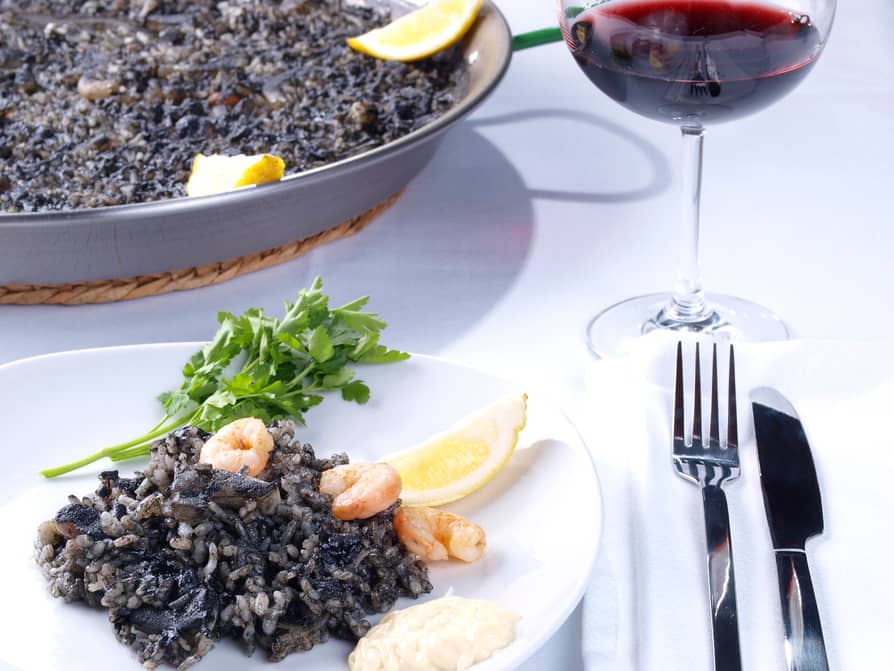 One thing is for sure, no one in Spain cooks the rice better than the Valencians. In fact, with such an abundant variety of rice dishes that range from the celebrated Paella and Arros al Forn to the humble Arros a Banda and the rather weird Arros Negre, it’s easy to see which ingredient dominates the elaborate Valencian cuisine.

However, if you’re visiting Catalonia or the Valencian Community, skip the hyped paella, which is now a traditional Spanish food and can be found all over the country, and try the local and equally delicious Arros Negre. This dish hails from Castellon and its traditional recipe uses white rice, squid or cuttlefish, seafood broth, olive oil, paprika, onion, and squid ink, the secret ingredient which gives it the intense dark color. Arros Negre is usually served with allioli (aioli). 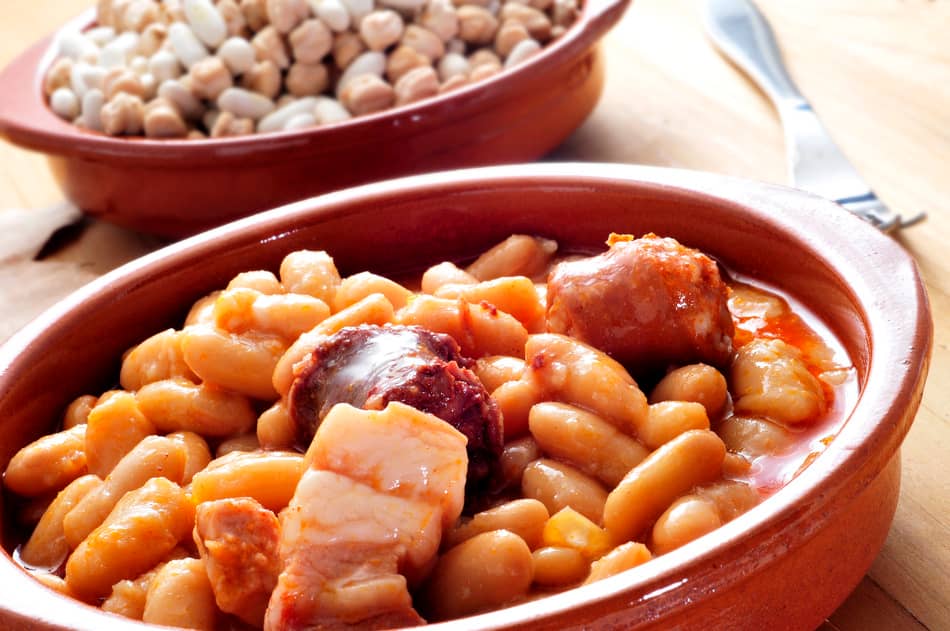 One of the most popular Spanish foods, Fabada Asturiana is a hearty warming stew of beans and sausages, originating in the Principality of Asturias, in northwestern Spain. The traditional recipe requires fabas (locally-grown large white bean), chorizo, morcillo (Spanish blood sausage), smoked paprika, and saffron.

Due to its great nutritional value, Fabada Asturiana is commonly served during the cold winter months, but it’s not unusual to find it on many restaurant menus all year round.

Simple, healthy, and full of flavor, Pimientos de Padrón make for a lovely tapas dish, especially when you’re visiting the Padron region in southwestern Galicia. This is where the Franciscan monks first cultivated them in the 16th century.

Originally from Mexico, these small green peppers are now protected under the Pemento de Herbón PDO, and served fried in olive oil and dusted with coarse-ground sea salt in Galician tabernas and tapas bars across the country. The fun part is that although they’re mostly mild and delicious, occasionally you can come across a very hot one. That’s why the process of eating them is often called the “Spanish Roulette”.

In order to honor the delightful Pimientos de Padrón, a gastronomic festival is held each year, in the first Saturday of August, (since 1979) in the Herbon parish (La Coruna). 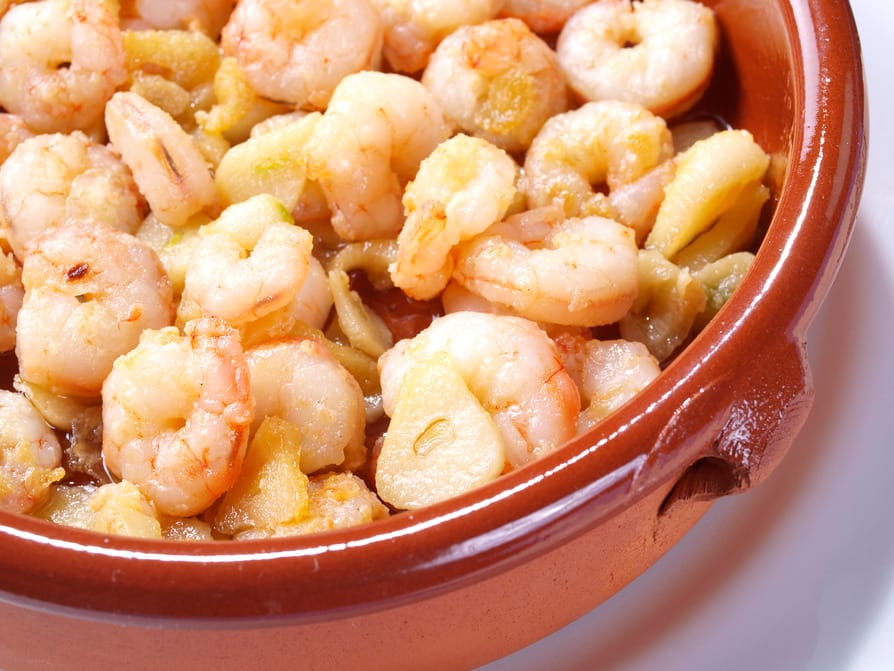 Usually served as a tapa, Gambas al Ajillo (garlic shrimps) is an easy, mouthwatering Spanish dish extremely popular in the south of Spain, where seafood leaps straight from the sea to the plate.

This is one of the tastiest and most widespread tapas dishes, so you can find it in bars and restaurants all over the country, sometimes even served as a main course. The focal ingredients are shrimp, garlic, and olive oil, but even so, it’s hard to find two versions that taste the same, as Spanish cooks tend to add their own touches to every food they’re preparing. The classic recipe will always include a bit of dry sherry (Vino de Jerez), sweet Spanish paprika, fresh lemon juice, and parsley.