A Football Fan’s Guide To Madrid

Madrid loves football, and, judging by the success of its phenomenal teams, it’s easy to say that football loves Madrid back.

Home to no less than 4 football teams, 4 stadiums, and an amazing bunch of fans, the Spanish capital is certainly an excellent place to experience the excitement of European football at its finest. In addition to its two major clubs, Real Madrid C.F and Atlético de Madrid, the city plays host to Rayo Vallecano – also playing in La Liga, as well as Real Madrid Castilla – Real Madrid’s reserve team.

As a football fan, there’s clearly no better time to visit Madrid than during La Liga. According to UEFA, La Liga Santander has become the strongest in Europe, dominating the world of football in the last 5 – 6 years.

The season usually runs from the second half of August to the end of May, and comes with weekends packed with high-quality football and electrifying atmosphere. Moreover, you’ll also have the opportunity to watch a series of King’s Cup, UEFA Champions League (Tuesdays and Wednesdays), and UEFA Europa League (Thursdays) matches that will keep you entertained throughout the entire week.

If there’s just one thing that you should splurge for as a football fan in Madrid, it’s a visit to the Santiago Bernabeu stadium. Whether you opt for a Bernabeu tour or you’re lucky enough to see the hometown heroes playing a match right in front of you, the experience will be downright remarkable.

With a capacity of 85, 454 spectators, the Santiago Bernabeu Stadium is the third largest in Europe after Wembley and Barcelona’s Camp Nou. Nevertheless, the home of Los Blancos it is known worldwide for being one of the most prestigious football venues in the world, and the address of the most successful football team in the history of UEFA.

The tour will offer you a panoramic view of the stadium, accompanied by a visit to the royal box, dressing room, shop, the tunnel, and the trophy hall, where you’ll have the opportunity to get an insight into the club’s fabulous history. 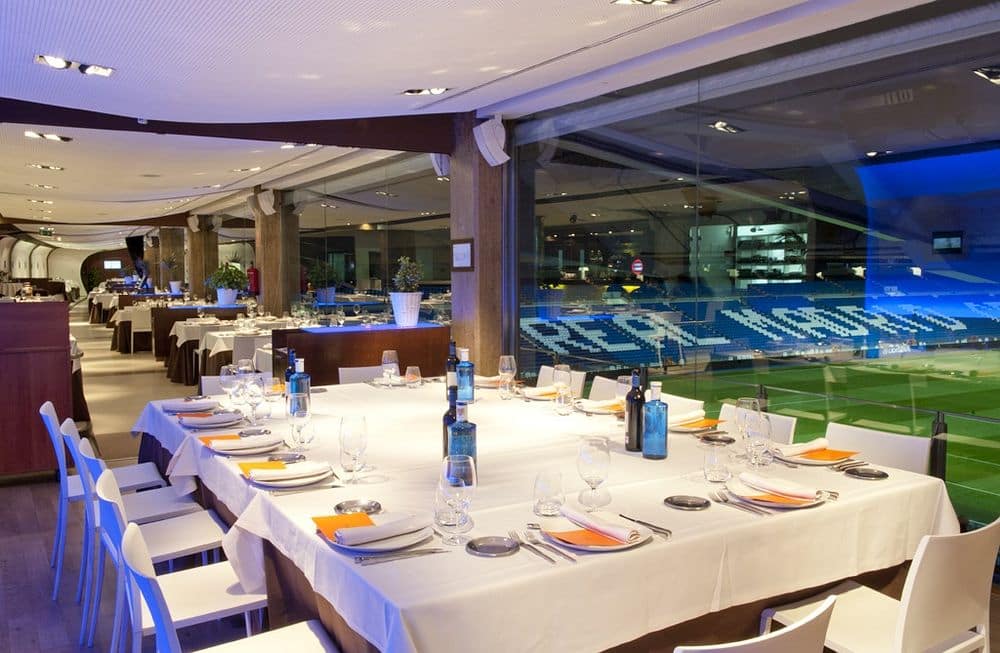 Estadio Santiago Bernabeu lies on Paseo de la Castellana, one of Madrid’s foremost avenues, and can be reached by metro line 10 from Plaza de España or Tribunal station on Calle Fuencarral.

After spending more than 50 years on the legendary Vicente Calderon, Atlético de Madrid football club moved to the new Wanda Metropolitano on September 16th 2017. Designed by famous Antonio Cruz and Antonio Ortiz architectural studio, the new home of the Rojiblancos is the first 100% LED football stadium in the world, a state-of-the-art facility covering 88,150 square meters.

If you have the opportunity to attend a match here, don’t hesitate. The atmosphere on the new stadium is just as amazing, as Los Colchoneros’ fans are known as some of the most fervent supporters in Spain.

Tours of the Wanda Metropolitano are available Monday to Sunday from 11 a.m. to 7 p.m., and include access to the pitch, stands, mixed zone, press room, dressing rooms, and, of course, a walk through the brand new tunnel, whose walls are decorated with quotes by Diego Simeone and Luis Aragones.

Wanda Metropolitano is located in northeast Madrid, near the Barajas airport and the IFEMA area. 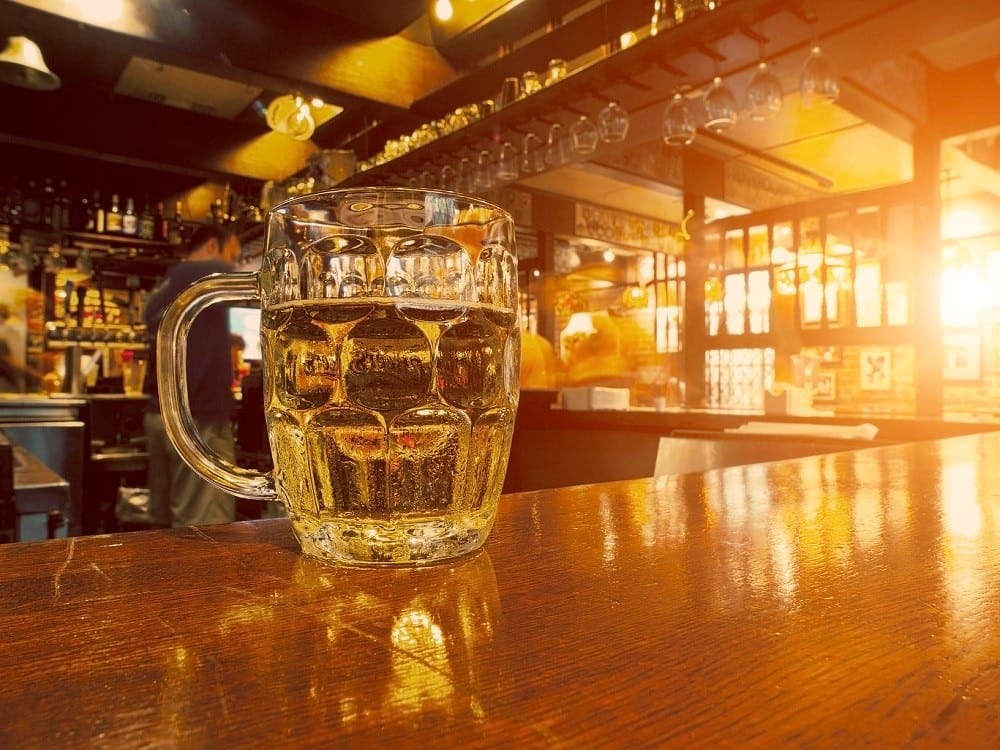 Madrid is brimming with football fever and you don’t have to be a keen Madridista or a fervent Atleti supporter to understand and enjoy their passion for the beautiful game. The city is overflowing with cheerful sports bars where you can soak up the country’s amazing football culture.

A great concentration can be found in Puerta del Sol and Plaza de Santa Ana, in the bustling heart of Madrid, but there are all kinds of places where you can watch football games throughout the city. Sports bars in Madrid range from high-end venues equipped with loads of giant HD – and even 3D – screens to more intimate neighborhood joints, where everyone knows everyone. The atmosphere, however, is always the same – boisterous and unmistakably Spanish, so don’t be surprised to see the crowds going wild with excitement when their favorite team scores.

The Fountains of Cibeles and Neptune Situated on Paseo de Recoletos, the central boulevard that connects Madrid’s Plaza de Cibeles with Plaza de Colon, the mighty Cibeles Fountain is not only a symbol of the Spanish capital, but also the place where Real Madrid fans gather to celebrate their team’s victories. If the game is of great significance (a finale or an event for which medals and titles are awarded), it’s not a surprising sight to see Los Galacticos themselves popping out of their fancy bus right in the middle of the enthusiastic crowd and celebrating the triumph with their supporters.

Just a few yards down, in the heart of Plaza de Cánovas del Castillo, where the boulevards of Prado and Recoletos converge, stands the other major fountain in town, the Fuente de Neptuno – another magnificent monument, another goddess, another football team. 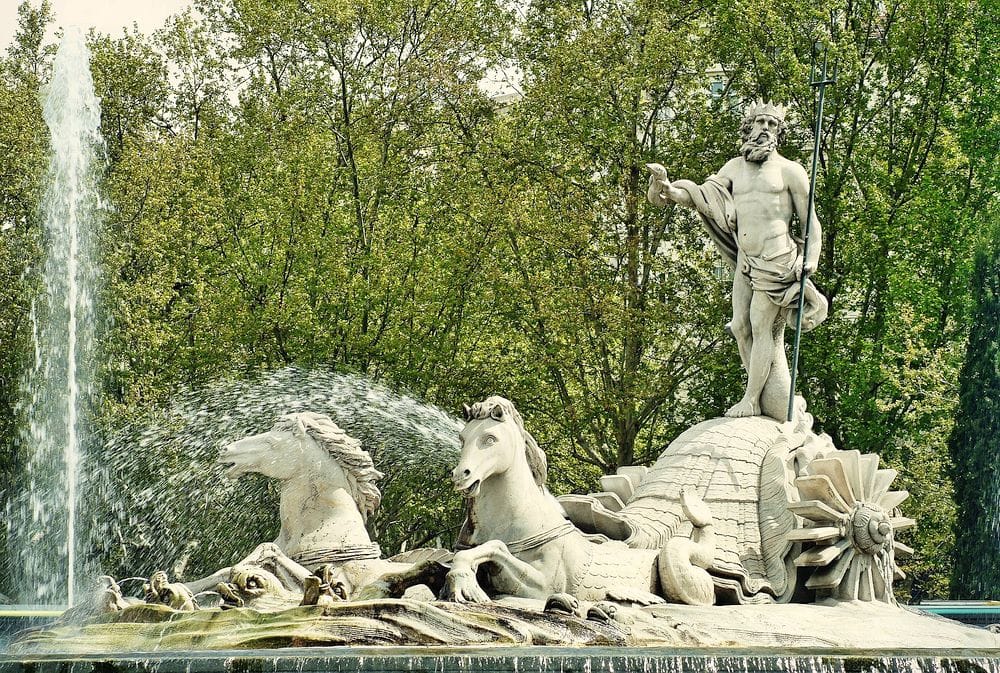 The Fountain of Neptune is where the victories of Madrid’s other famous team – Atlético de Madrid – are celebrated.

There are 7 official shops in town that sell original Real Madrid products. One is the spectacular three-floor megastore at Santiago Bernabeu stadium, near Gate 57, but you’ll also find the Club’s official products on Gran Via, in the chic Las Rozas shopping Village, or along the pedestrian Calle del Carmen, in central Madrid. All shops are licensed to distribute official Real Madrid merchandise, including football kits, training wear, jerseys, T-shirts, bags, and all sorts of gifts and souvenirs.

For official Atlético de Madrid gear, head to the official club store at Wanda Metropolitano or check out their second one in Majadahonda, inside the Gran Plaza 2 shopping mall.